Art is everything, especially in Lake County. Whether it's a mural sketched on our favorite store or installations popping up all around town, the knack for art is fluent in the land of lakes.

Clearly, art is kind of a big deal in Lake County with each community's monthly and annual celebrations i.e., ArtWauk in Waukegan and annual events like the art festivals in Highland Park, Lincolnshire, Deerfield and a slew of others.

Some of the installations are on display for a limited time, while others are permanent pieces. Here are several locations of street art and murals in Lake County.

The Deerfield Fine Arts Commission expanded it's public murals and installed new portraits by Deerfield High School students. The murals are located on the east wall of the AT&T building in the Village of Deerfield's Village Center. The mural contest occurs annually. The murals go on display for one year and are replaced by the following senior's art. The 2020 winners are Lauren Colwell and Kamilija Intaite. However, the murals above are last year's winners.


"The work of the eyes is done. Go now and do the heart-work on the images imprisoned within you." We will forever be in awe of @fernando_chamarelli and his boundless talent and we are lovingly humbled by the Universe and the opportunities we have been given to share in our humanness, our passion, our creativity and our art spirit. @foxlakeil . . . . #rilke #art #murals #heart #collaboration #inspiration #beautyandbrawngallery #fernandochamarelli #community #braziltochicago #foxlake #artisforeveryone ?: @superbroad @fernando_chamarelli

"Advice from a pelican, 'Wade into life. Look beneath the surface. Soar over rough waters. Stretch yourself. Go fish!'" If you were wondering about that big bird on the wall on the East side of Route 12 and Grand Avenue, that is the Fox Lake Mural. McHenry County resident and muralist, who was a fine art major from Northern Illinois University, created the beautiful work of art on the east wall of the Lakes Realty building. Fox Lake wanted to emulate the vibe of a vintage postcard. It's the perfect backdrop for the village's annual Pelican Palooza. Chicago muralist (by ways of Brazil) Fernando Chamarelli created a colorful mural on one of the walls in Fox Lake in October 2019.


We couldn’t BEE more excited to reveal this collaboration with the @grayslakeparkdistrict • huge thank you to the GLPD for the installation & to artists Bonnie Shorr, Katie Shorr, Heather June, & @paulpriceart • the bees will be up in Central Park for a few weeks before moving to another location. Bee sure to stop by, take a photo, and use #beekindgrayslake & #grayslakeparks

Recently, the Grayslake Park District and Grayslake Arts Alliance installed the "Bee Nice" project, an environment education statement and photo opportunity in the village's Central Park on Library Lane. The installation is to raise awareness of the declining bee population and the importance of pollinators.

"Everybody is a star. Who would rain and chase the dust away? Everybody wants to shine. Who'll come out on a cloudy day" - Sly and the Family Stone.  A series of installments have been placed around the Village of Mundelein, donning the town's star logo. These fiberglass star sculptures have each been transformed by different local artists in varying themes such as “Alice in Wonderland,” “Starry Night,” “Birds of Lake County,” and many more. The unique art campaign launched Mundelein Arts Commission is the perfect outdoor activity during the public health crisis and site to see in general! In 2018, artist Giuseppe Percivati, also known as Pepe Gaka, painted a large mural at 18 E. Park St. near Park Street Restaurant and Tony Cannoli. Each letter conveys Mundelein doing Mundelein, including Univerisity of St. Mary's of the Lakes, Diamond Lake, the Mundelein and Carmel Catholic High School mascots, the Countryside Golf Course and many other activities, venues and events. In honor of the mural, Tighthead Brewing Co. created a limited-time beer that year called the Mundeleiner Lager.

Two murals were created last year in the Vernon Hills Mall. Myron Laban, a Des Plaines pharmacist and painter, created a mural called the "Uplift Series." This specific mural represents the ability to keep moving forward during a struggle while always maintaining hope. That piece really rings true in 2020, as Laban was named the Chicago Reader's best new visual artist in 2019. A second art piece on the former Sears building was turned into an immense canvas or an upscale mural. Chicago-based artists Anthony Lewellen, an innovative figure in the Chicago graffiti culture, designed a wonderful sketch for the building. It's big, it's bold and its brilliant. Unfortunately, since then, the building has been knocked down due to renovations.


Good morning from Vernon Hills and @andreas_hogue_salon! ☀️ It’s a beautiful day and we hope you enjoy it.

Right across the street, Mellody Farms shopping mall has an assortment of murals. One of the standout pieces is entitled "Things To Come" which is of Mercury, the Roman god of merchants and trade.


Sat in front of my dream big mural with a couple dope dudes (@angelstat2 @rulo8a23 @quintospeaks) and we chopped it up about our stories and the community. Check it out! LINK IN BIO #interview

The City of Waukegan reigns supreme as the art capital of Lake County. Besides all of the murals in the area, the City of Progress has an extensive list of galleries and areas dedicated to all creative and cultivated mediums. Twelve months out of the year, they throw an art hoedown called ArtWauk where a plethora of talented individuals showcases their work. Artists feature portraits, sculptures, photography, culinary arts and a slew of other artistic vibes. The city pays tribute to some of its most famous residents in many of the art pieces, but many of the murals displayed to honor the city's deep cultural heritage. From Waukegan Park District's Arts Park to the Black Lives Matters solidarity fists donning the windows of the Dandelion Gallery, to the statues of stellar Waukeganites, the city along the Lake Michigan coast oozes inventive and poetic creativity. Continue to scroll to see a list of Waukegan murals and artistic areas.

Adler Outside Arts Initiative in Libertyville

The Adler Arts Center in Libertyville is known for setting the bar for youth arts culture. During this pandemic, volunteers gathered at the front yard of the historic building to erect mobile mural boards. These murals showcase a silhouette of a palette, a cello and a dancer.

"Old Marley was as dead as a doornail.” Jacob Marley and a cast of other memorable Charles Dickens characters are lined along Antioch’s Main and Lake Streets to offer visitors a cheerio to the holiday. This Olde English public art exhibit comes to life with Dickens Holiday Village, over 40 lifelike mannequins spread along the streets, displaying over 25 different storylines and acting out different Dickens’ scenes. Get the “bah humbug” out of your soul with these charming displays. Across town, Kringle’s Christmas Village illuminates with the holiday spirit. In an indoor storefront pop-up down from Piggly Wiggly, many shadowboxes provide that same nostalgia attained when enjoying Chicago’s Marshall Fields’ windows. Both are on display during the holiday season. During the summer, Christmas still lives as 30 snowmen made of wood are designed by talented artists for two months in shop windows. 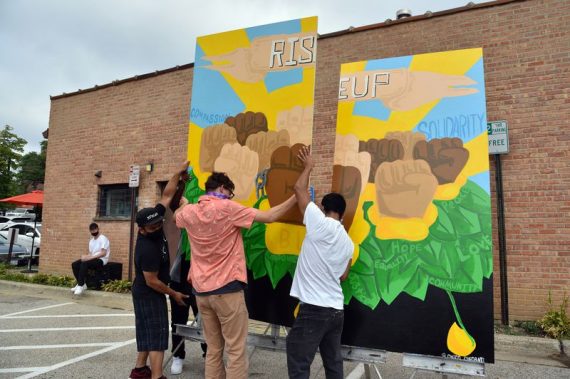 Under the viaduct on Green Bay Road and Bloom, there's a beautiful nature mural with sunflowers. Also, Curt's Cafe has a design called "Rise Up" created in by North Chicago resident Ivan Rodriguez collaboration with the Highland Park Arts Center. The painting was made in the wake of the recent protests regarding the police killing of unarmed African Americans. The painting holds a chain as BLM (Black Lives Matters) is labeled across the top. The social-justice themed mural will be installed to the side of the cafe.


Our Panther dog has found a forever home! Under the guidance of Spanish teacher Nan Caldwell, our current eighth-grade class "adopted" this little pup to participate in the @lakebluff125 Dogs on the Bluff exhibit. After proudly representing LFCDS all summer long in downtown Lake Bluff, our sweet Panther dog will now live on campus, where we're sure there will be lots of love and care from our students! @lakeforestlakebluffchamber @lflbhistory #lfcds #wheregreatnesstakesroot #lakebluff #communitypartnerships #welovedogs #classof2021

For other street art and murals in Lake County, click here. To learn about more things to do in the land of lakes, continue here.