Lake County, Illinois, CVB - An Architect, a Builder and Utopia

An Architect, a Builder and Utopia

Tour the homes of three fascinating Lake County residents, all with different visions.

The City of Zion was founded in 1901 by Dr. J. Alexander Dowie; it is one of the most representative religious utopias and planned industrial communities of the 20th century. Zion is also one of only a few in the world to have ever been completely planned out before building. Most of the north-south roads were all named from the Bible and it was 'dry' until just a few years ago. Dr. Dowie also started the Zion Tabernacle of the Christian Catholic Apostolic Church which was the only church in town.

You will tour Dr. Dowie’s, three-story 25-room mansion also built in 1901. Many of Dr. Dowie's personal belongings are on display in the house including lovely samples of lace and tools from the Zion Lace Factory, mementos from Zion Industries and volumes of Dr. Dowie's books, writings and the local newspaper. 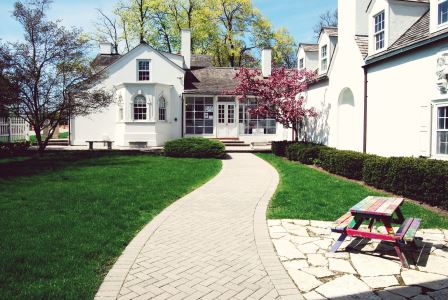 eye for detail, and acute visual memory to achieve excellence in his field.  After touring Europe many times for inspiration, Adler went to work for the famous Chicago architect, Howard Van Doren Shaw. Shaw was a residential architect of the “great house” period. Shaw also built many private residences in Lake Forest, which now stand as neighbors to Adler’s finest works.  Adler’s designed homes and country estates can be seen throughout the United States and the Chicago area.

Today, the historic property, nominated to the National Register of Historic Places on November 22, 1999, includes the home and 11 acres. The integrity of the Adler Arts Center is excellent. All of the public spaces are intact, and the major historic features remain.

There are several restaurants available for group dining along MainStreet Libertyville such as Café Pomigliano, Chrissoulas Restaurant, Main Street Social, Mickey Finn's Brewery, O'Toole's of Libertyville and more. Or you may let the group wander to have lunch on their own, browse hops and meet up at beautiful Rose Garden for the home tour. 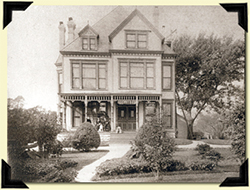 Continuing on Milwaukee Avenue, Libertyville’s most prominent building, the Cook Mansion was built in 1879 by Ansel Brainerd Cook. Cook, a teacher and stone mason, became a prominent builder and politician in Chicago, providing flagstones for the city’s sidewalks and taking part in the rebuilding after the Great Chicago Fire of 1871. The two-story Victorian mansion served as Cook’s summer home as well as the center of his horse farm, which provided animals for Chicago’s horsecar lines.

Cook’s wife, Emily donated their home to be used as a public library until it outgrew the space in 1968.  It is now on the National Register of Historic Places and serves as a focal point for the Village of Libertyville.

Before heading home, you may ant to arrange a group sweet stop at one of the boutiques along MainStreet. From Chocolate to frozen delights and coffee shops, there something tp please everyone.