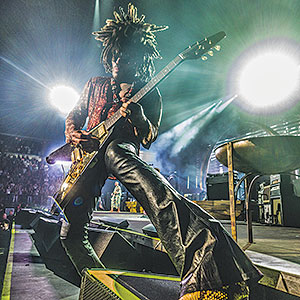 Ravinia has just announced that Lenny Kravitz, who turned in one of the best-loved concerts at the festival in 2015, will be returning on September 7. The four-time back-to-back Rock Vocal Grammy winner released his 11th album, Raise Vibration, last fall and has been buzzing with his signature, soulful social funk ever since. Additionally, the post-punk band Interpol has joined Morrissey’s fully revealed North American tour, which includes a stop at Ravinia on September 14, when both artists will make their festival debuts. The concert will now start at 7:00 p.m. Interpol was at the leading edge of the post-punk revival at the turn of the millennium and has a new EP, A Fine Mess, due out on May 17 to follow up last summer’s Marauder. Morrissey’s tour is in support of his forthcoming album of ’60s/’70s covers, California Son, featuring his just-released single of the Fifth Dimension hit “Wedding Bell Blues” with guest vocalists Billie Joe Armstrong of Green Day and Lydia Night of The Regrettes. Tickets to both of these dates go on sale to the general public with the rest of Ravinia’s season over May 7 and 8.