America With Special Guest The Buckinghams at Genesee Theatre 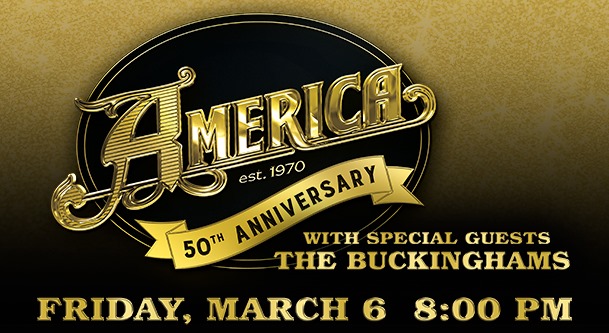 Bringing its signature close vocal harmonies and light acoustic sound to the stage, longtime rock favorite America is celebrating 50 years together as a band. The group's breezy, folk-rock anthems made it a favorite on Top 40 and adult contemporary rock stations throughout the 1970s.

America's self-titled debut album reached number one on the U.S. charts and went platinum on the strength of its blockbuster hit, A Horse with No Name. A year later, the group won the Grammy® Award for Best New Artist.

The band has received much critical and commercial acclaim for its timeless hits. In 2006, America was inducted into the Vocal Group Hall of Fame, and in 2012, it was honored with a star on the Hollywood Walk of Fame.

Special guest group The Buckinghams was one of the most successful sunshine pop bands to come out of the 1960s. Based out of Chicago, the group charted five Top 40 hits in 1967 and continues to play for audiences across the country over fifty years later.