"You're the pride and joy of Illinois. Chicago Bears, BEAR DOWN." 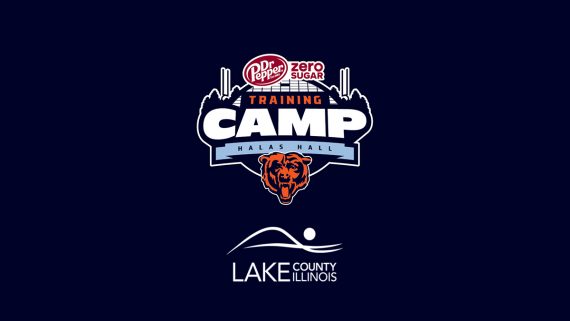 This is the first time the Chicago Bears Training Camp is open to the public at Halas Hall in Lake Forest - right in our backyard. 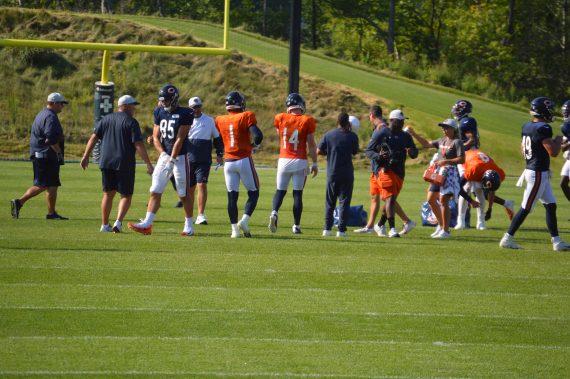 Camp visitors must park at Hawthorn Mall in Vernon Hills and are shuttled to and from Halas Hall. Monster of the Midway aficionados are encouraged to venture around the Lake County mall to experience the lavish accommodations, dining and shopping options and more. Continue here to view the guide.

Upon entering the pigskin sanctuary, you can get a clear view of the giant Ursidae threshold in the distance as you enter the practice facility area.

Outside of the practice areas, Chicago Bears nation is in the air. Young and old can set up under center as QB1, bark your calls, drop back and train like an NFL hurler. Across the way, it's wideout land. Amateur receivers can dive for the quarterback pass after running their post slant route. Your partner in crime can grab video of your ESPN Top 10 moment for the diving TD snag. 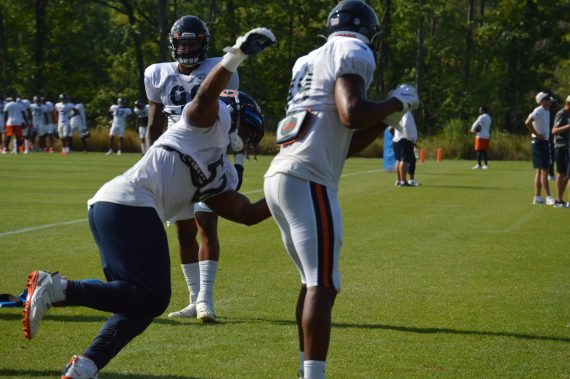 Maybe Xs and Os aren't your forte, and you need strength and conditioning. Test your flex and cardio with training ropes from BEARS Fit.

You're also met with the storied history of the century-plus old establishment. Take a selfie with a life-sized bobblehead of Sweetness or the Maestro of Mayhem. Snap a gram of the helmets and legendary jerseys in the makeshift locker room. Finally, get a C painted on your face at the face painting booth of the Kid's Club.

The T-formation franchise also has a DJ on-site playing many bangers that slap, a concession stand serving delectable eats, refreshing drinks and libations and a gift shop. 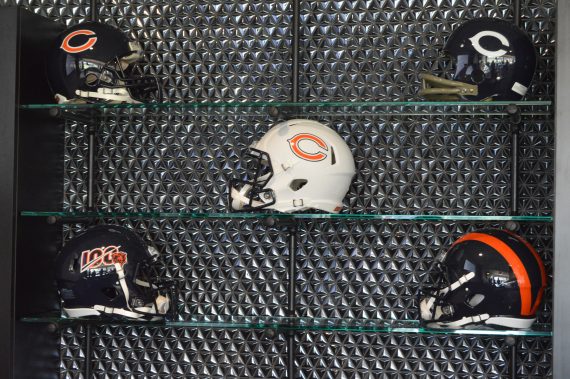 Halas Hall has been a fixture in Lake Forest since 1979. The complex was named after long-time owner and coach of the Bears, George Halas, and was located on Lake Forest College's south campus. Since 1997, the Bears have called this new location by the I-94 Tri-State home. They also have an indoor field space named after the late Hall of Fame tailback Water Payton Center. Inside this state-of-the-art facility showcases more NFL training exercises. 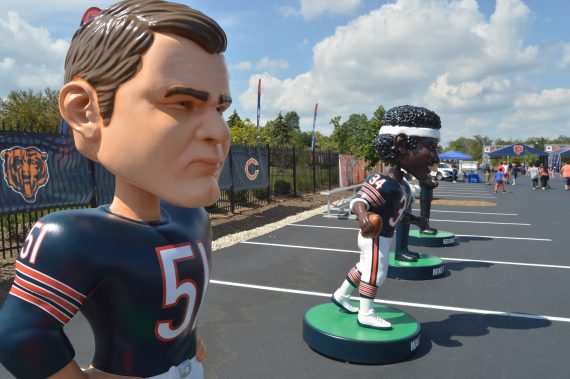 Two football fields are located right outside the main Halas Hall complex, while fields 3 and 4 hugs the train tracks on the east end of the grounds.

When you get into the stands, you see these massive men appear from the entrance. Clearly, it's a bit more challenging to remember who's number is who's with the transition of NFL jersey numbers as running backs, receivers and tight ends can now wear any digit from one-to-49. Defensive backs are also permitted to wear numbers one-to-49 and linebackers can wear any number between one and 59 and 90-to-99. 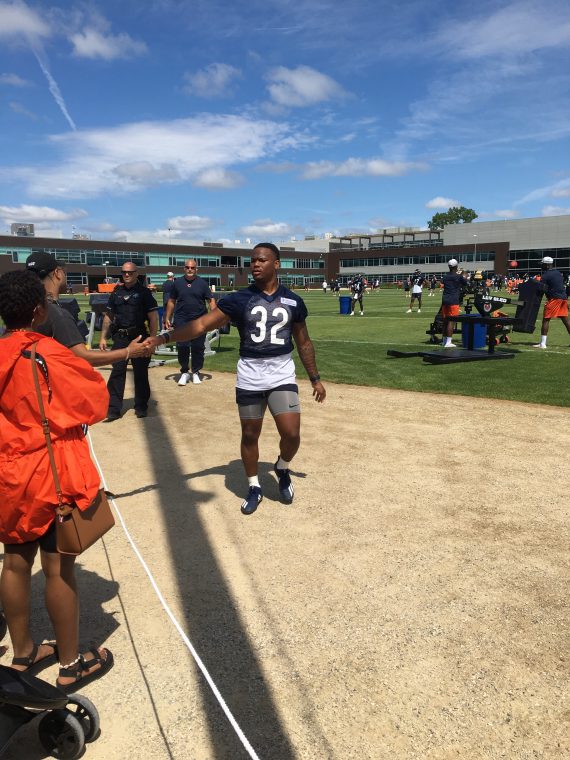 Fans really get a vibe of the energy flowing and the hunger rising for the Vince Lombardi Trophy as they run through drills. Players and fans alike react wildly during big pass plays as if they were at Soldier Field. The players cheer each other on as if they're on an actual game's sideline as the camaraderie builds for the season. 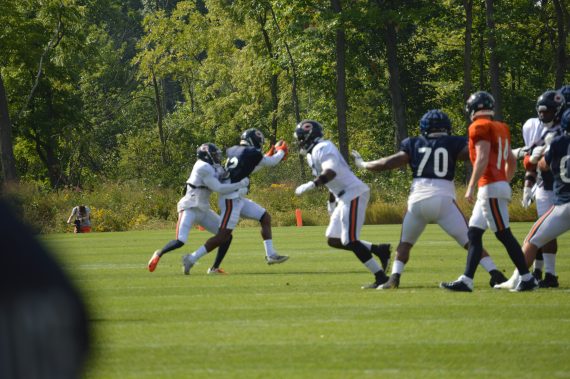 You can't help but note the new kid on the block, Justin Fields, the organization's quarterback of the future, who was drafted at no. 8 in the 2021 NFL Draft. When Fields steps up under center, you the supportive slogans from the fan base as the peanut gallery murmurs about the Ohio State University standout.

Whether you're a football fan or not, the experience is like no other. There are three days left of training camp, but unfortunately, all tickets are spoken for 2021. Dr Pepper Zero Sugar Chicago Bears Training Camp will run Aug. 23-25 from 8 a.m. to noon. 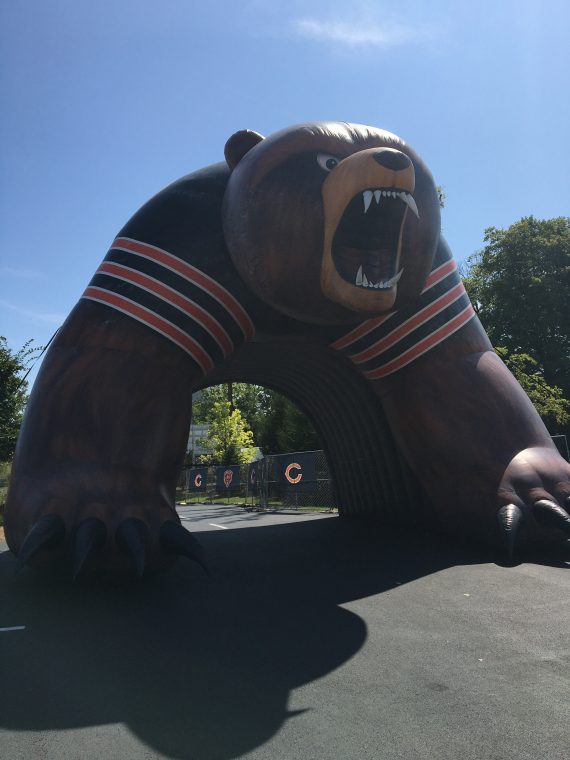 Continue below to view our TikTok post, and get your tickets early for 2022's edition of Chicago Bears Training Camp at Halas Hall. Also, continue scrolling to see where you can watch the Monsters of the Midway in the land of lakes. Enjoy the 2022 NFL season, Lake County! 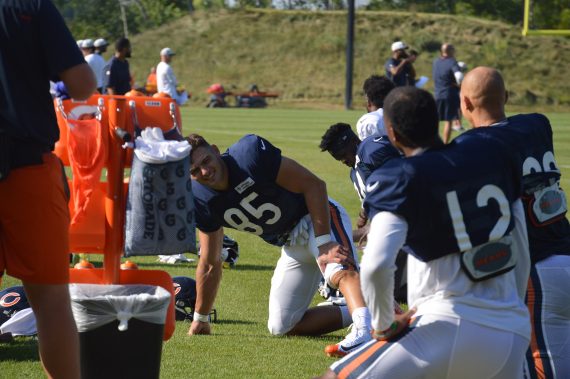 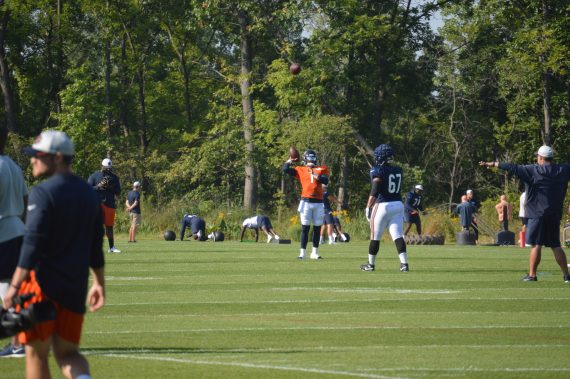 If you're looking to get your youngster started on the Chicago Bears path, continue here. To see a full list of eateries in the land of lakes where you can watch the Bears game, click here. If you have tickets, and are going to Halas Hall in Lake Forest this week, continue here.